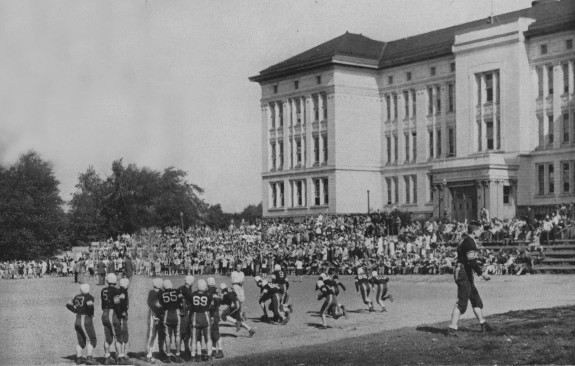 The land that City Honors School at Fosdick-Masten Park occupies is located at one of the highest points in the City of Buffalo - giving City Honors School the nicknames “The School on the Hill” and “The Hilltop.” In the early 1800s the land where our school now stands was set aside as a “Potter’s Field” where victims of cholera epidemics, the poor and indigent, and those without religious affiliation in the city were buried. In 1885, the City hired renowned landscape architect Frederick Law Olmsted to convert the land, by that time surrounded by bustling neighborhoods, into a picturesque public park named “Masten Place” overlooking the city. In 1895, the City decided to build its second high school on the land. Masten Park High School opened in 1897. The school was renamed Fosdick-Masten Park High School in 1927 and now houses City Honors School at Fosdick-Masten Park. In 1983, the building was added to the National Register of Historic Places.  From its inception, the front of the school building (west façade) included a large rolling lawn that eventually worked its way down to Michigan Avenue.

Modifications to the grade of the land over the decades, and installation of bleachers in the hill overlooking the land in front of the school, resulted in the green space being used for physical education, practices, recreation and athletic contests. This field was referred to as “Fosdick Field” in honor of the longtime and renowned first principal of the school (1897-1926), Frank “Pop” Fosdick. In 1977, Fosdick Field was eliminated when it was acquired by the Buffalo Municipal Housing Authority (BMHA) for $15,000 and housing units known collectively as “Woodson Gardens” were constructed on the land. Fosdick Street was constructed and the campus was cut in half. In addition to the loss of the green space for the children of the school and neighborhood, the construction of these housing units significantly changed the aesthetics of the FMP building by obscuring the “School on the Hill.”

In the mid-2000s, the BMHA began phasing out Woodson Gardens. In 2009, the last of the units was vacated and they were demolished in Summer 2013. A 2011 environmental survey confirmed that, as was confirmed with the main portion of the school campus in 2006, the Fosdick Field land contained extensive remains from the Potter's Field Cemetery situated at this location for most of the 1800s.

During the time the units were being phased out, the City Honors/Fosdick-Masten Park Foundation formed the Fosdick Field Restoration Committee led by school principal Dr. Bill Kresse. The City Honors/Fosdick-Masten Park Foundation joined this effort and in August 2016 the Foundation took title to the land with an agreement with the Housing Authority to complete payment for the land by June of 2019.

The City of Buffalo and the Medical Campus Neighborhoods (Fruitbelt, Coldspring, Perry) are on the move. You can add to this momentum by using the buttons below to support the restoration of Fosdick Field!

Make an Online
Donation Other
Ways to Give